Lively town all year round, comes alive for a series of major events in the area of Chianti, including the Chianti Festival (June-July), theater and music festivals, and Goblets of Stars in San Lorenzo night (10 August). Other events are local and traditional character, as the feast of Pentecost in the spring and the Fiera del Watermelon August 24 with markets and shows. In autumn the event takes place Chianti in Autumn.

WHY CASTELLINA IN CHIANTI

At the turn of the Val d’Elsa, Val di Pesa and the Valley of the river Arbi, its territory is all in the Chianti Classico. The road to Castellina is very impressive from the point of view and the country has a rich history dating back to the Bronze Age and the Etruscans. There are also many testimonies of medieval times.

The old town is pedestrianized, we recommend the bike trails in the area.

The historic center of Castellina was completely renovated. Here are two interesting archaeological sites: the Mound of Montecalvario, on the main road to reach the village, is an important testimony of the Etruscan period dating back to VII-VI sec. B.C. It belonged to an aristocratic family. Near Fonterutoli is the Necropolis of Poggino. La Rocca is located in the main square, is a tower of the fourteenth century from whose top you can admire the Chianti landscape. Also worth seeing is the Monternano Castle and the Archaeological Museum of Chianti inside the fortress. In the historical center in Via Ferruccio you will find many restaurants, boutiques, shops and historical buildings such as Palazzo Squarcialupi and Palazzo Banciardi. 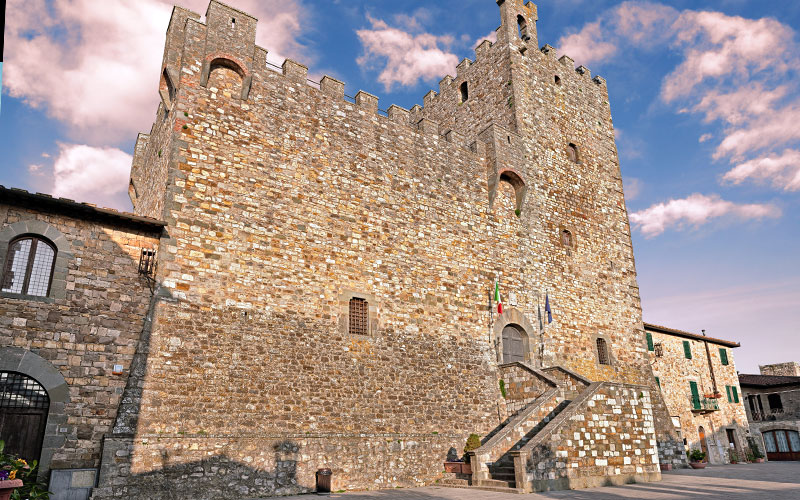 Visit the old town, stroll along the walls in the Via delle Volte, a picturesque covered walkway that goes around the city, once used by the guards, now shopping arcade and restaurants. The overlooking offer views of the surrounding countryside. For shopping you can continue on the main street, Via Ferruccio. There are many wine bars where you can taste local wines: Enoteca Antiquaria are over 15 thousand specimens of wines, some with more than 100 years. The area is ideal for a bike ride, and you can also reach the archaeological sites not far from the center.